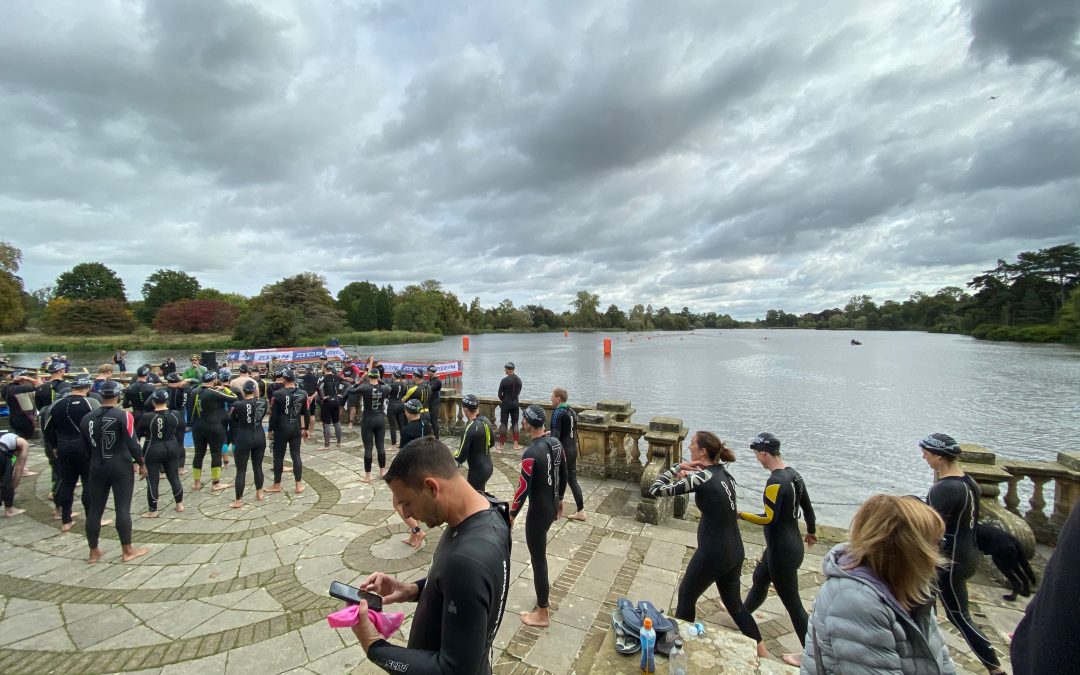 28th September was the final race of the year for me, doing the Castle Swim Series at Hever Castle. Given I started this year with no plans to do anything more than give open water swimming a try, I’m slightly chuffed I’ve done two Aquathons, two river swims, far too many lake swims and a 2.5km race.

I must admit I’m not a fan of the later start as it leaves you with that “I just want to get on and do it” urge. It’d been a weird week at work leaving me mentally kicked and that started to show on the drive there. I was listening to an audiobook most of the way (Undead and Unreturnable…total teen lit but I love it, don’t judge me…) but thought I would kick it up a notch with my Power Up playlist for the last 20 minutes. Apparently that was a bad idea as the first track that came on was This Is Me from the Greatest Showman. I was not ready. The anxiety kicked in, the emotional champagne popped, the tears started to flow. Not great when driving. Told the annoying woman in the car that I wanted the audiobook back and she complained there was no internet, bloody Siri.

The diversion to the Tri parking took me down some lovely country roads and I eventually parked up and started the 10 min walk to the Competitors Village. Once I was surrounded by people the game mask came on and I followed signage to the Swim Registration in the Loggia right by the lake. You couldn’t ask for a more picturesque area – Italian statues in amongst Roman architecture. Timing chip and hat picked up, I then started the fun of trying to guide my parents to the lake as they had come to watch. We set them up on the edge of the lake and with the normal open water swimmers modesty I started to strip off and get the wetsuit on amongst the families on the lake edge.

Heading off to the briefing area by the fountains I watched the 5k wave before us starting off before our briefing. They went over the course as it’s a nicely complex one (I only noticed the last 500m dip back up and down the lake that morning!).

We had warnings about the lake being shallow and to make sure aimed for the middle of the bridges on the river section as the concrete supports are only a few inches under the water. Overall a brilliant briefing session and we were then told to get in the lake (no diving as it is shallow) and head to the start boys. As I swum out the 100 metres or so I noticed it looked like a few people were standing up so I tentatively put my feet down, and yep, there was the sludge covered bottom so they really weren’t joking.

Starter horn went off and I stayed near the back of the pack as I’m far too wary of making a tit of myself amongst the washing machine fun at the start. Zero visibility in the water and I noticed I veered off course a few times on the initial leg up the lake, occasionally feeling my hand brush the bottom. Few times I felt my hand catch brush someone’s foot or someone brush mine. We were warned the river section would be a few degrees colder but I didn’t really feel any difference.

Once we hit the river section we had some of the 5k swimmers join us on there second lap, and the 1 mile group catch us as they didn’t do the top loop so it started to get a little crowded. My only annoyance on this section was I got stuck behind a lady doing a slow breast stroke right in the middle of the river with the widest kick ever. So a little sprint past her. By this point I was just wishing it was over (we were about 1.7k into the 2.5k by this point.

The river spat us out and we did one last small loop into the lake before heading under the start gantry and getting out of the lake. I was a little zoned out by now and didn’t even notice my parents had relocated to near the exit and were taking photos.

Medal picked up, hot Ribena and a lovely ginger waffle thing (I need more of these in my life stat!) and meandered round to my parents before devouring far too many chicken drumsticks, pork pies and sausage rolls.

My watch recorded 49:41 which I was happy with as I was aiming for an hour. The official results came via text showing 49:35. Looking at the results table I had come 49 out of 120 which blew my mind as I thought I came near the back of the pack.

A brilliant event overall, though not sure I would do that distance again in the lake this time of year.